Why you should use a

It’s not just about the hype that surrounds the water dispenser, there is more to it than that. 1. Water at its purest form

This may come as a surprise to you, given Singapore’s Newater technology. However, the fact that it is still used mainly for industrial purposes then drinking shows that the idea still hasn’t caught on with the public. In the long run, Singapore will be able to use its resources to supply itself with water. Which means there will be a higher probability for wastewater to be converted into drinking water.

Although it is safe to drink the water, it still can raise some doubts. Hence, water dispensers will help reduce the doubts as it runs the water through another purification process before drinking. In its purest form, people will have more confidence in drinking the water.

With the COSMO Quantum and its 6 – step purification care process you will have access to the purest form of water available.

2. Save Money & Save the Earth

Globally there efforts are being made for environment sustainability. Owning a water dispenser will help you save the earth and your wallet! Globally there are more people purchasing bottled drinks causing concern for the plastic waste that harms the earth. With a water dispenser, there will not be a need to order boxes of water to the house for drinking. In addition, by reducing the frequency of purchase of bottled water, money can be saved as well.

With the Cosmo Quantum and it’s long lasting filters, you will be able to drink more while saving the earth and your money. 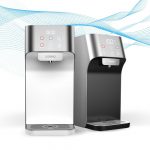 What to look out for

when choosing a water dispenser